Posted by Little Onion at 8:55 am No comments:

The walk started inside Vivid Projects. It explores “how the voice/body can articulate itself within digital/physical space. The route chosen considers how urban sites are navigated, their affect on day to day lived experience and the potential they hold for radical transformation.”

Involuntary Painting
Posted by Little Onion at 10:06 am No comments:

John is the barman at Twiggy’s Bar in Torquay. Twiggy’s Bar was formerly The Pickwick which was the pub that featured in the 1979 movie That Summer which stars a very young Ray Winstone. Ray plays a young man just released from borstal who goes to Torquay to find a job and enter the long distance round the bay swimming race. He finds a job as bar and pot man in The Pickwick.

It’s a good film in its own way and has a really good soundtrack that is of it’s moment.

John wasn’t aware that he was now the equivalent of the young Ray Winstone as he didn’t realise that the pub had featured in the film. Many of the punters in the pub did know and some even remembered the film being made.

I’ve got into the habit of searching out films made in and around place that I’m visiting. I watch them before the trip. It’s good tracking down the places films were shot once we arrive.

You can watch the film here - not a great copy but watchable.

Here’s The Pickwick as it was:

And below as it is now, Twiggy’s Bar:

Posted by Little Onion at 5:59 pm No comments:

Served In A Mug - Gavin Wade and Paul Conneally 2019 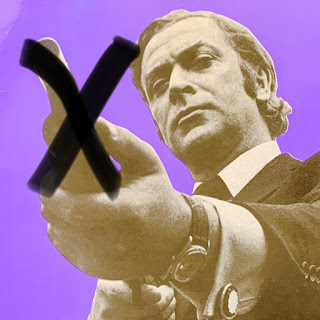 tripping himself he falls
onto his broken hand

time passes
I carry on looking up
into the sky

she turns back smiling
and gives me a wave

it’s a funny thing
the half moon

a pint of bitter
in a straight glass

you’re a big man
in bad shape
behave yourself

chilled to the bone
we make love
in our ankle socks

I take the call during
my keynote lecture

Tracey has a gin
served in a mug

‘Served In A Mug’ is a collaborative poem written originally as a series of tantwenga poems (tanrenga written via Twitter) presented here in a renga like format to be read aloud by two voices or in your head in two voices.

It ‘links and shifts’ to and from and includes direct quotes from the script of the British movie ‘Get Carter’ by Mike Hodges.

It is an intertextual intercranial collaborative poem rooted in the practice of renga poetry. The poem comes out of the ongoing Bred Pudding Collective’s work ‘Man From The North’ an original film script intended to move to film that in some ways mirrors ‘Get Carter’ in reverse written by the BPC’s Russ Ralph. 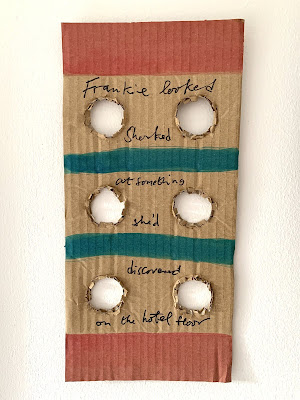 Posted by Little Onion at 6:49 am No comments: 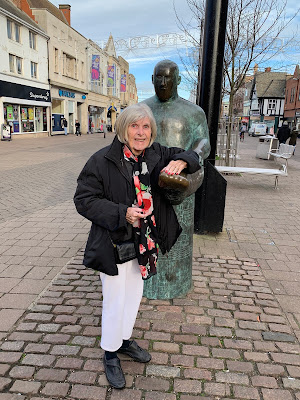 There are no ‘keep off the statue’ notices on The Sockman in Loughborough town centre.
People rub his toe for good luck.

I don’t think it works but just like my mum I always do it.

Others sit their children on Sockman’s outstretched stockinged leg.

His other foot is bare. One sock on one sock off. The statue is by Shona Kinloch and when commissioned and unveiled the press printed comments from outraged councillors and a few members of the public. They were wrong in their protestations. People in general love him.

Posted by Little Onion at 4:59 pm No comments:

Was good to be part of Policy Show 'Meeting #1: Unspoken policies of the art organisation' which took place on the 15th of September, 2–5pm, 2017.

Policy Show is Eastside Projects as a think tankmade up of a core group of artists and curators. The core group will create three new policies at three different scales through the processes of Policy Show. Each policy will be an artwork or be informed by art thinking and art making.

Policy Show is curated by Gavin Wade and Lucy Lopez

The next two policies to be looked at are:

GAGGED BY DIAMONDS (No Green Screen)

GAGGED BY DIAMONDS
(No Green Screen)

Stuck In The Gap

stuck in the gap
between my front teeth
summer's end

Posted by Little Onion at 7:14 am No comments:

"In 1957 Canada's National Defense Research Service carried out an experimental study into boredom, in which subjects were isolated in a hermetically sealed environment (a constantly lit cell with clear walls, furnished only with a comfortable sofa, rigorously devoid of sound, smell or variations in temperature). Extensive behavioral disturbances were noted by researchers. In the absence of external stimuli the brain was incapable of remaining in the state of regular excitement necessary for its normal functioning. They could therefore conclude that boring surroundings have a negative influence human behavior. This would certainly explain the unpredictable accidents that occur in monotonous labor, which would no doubt increase in frequency with the extension of current forms of automation."

Posted by Little Onion at 8:38 pm No comments:

YOU CAN'T BLAME THE YOUTH

Walking with no aim I come across a green bus shelter with the name of Peter Tosh graffitied on it. I'm immediately hearing The Wailers in my head and carry them with me for the next few hundred yards.

I've no idea if this scrawled 'Peter Tosh' was in homage to the great Peter Tosh or just some local youth inscribing himself into the very white very middle class seventies urban landscape at least until the next council paint over job but it raised the spirit of the the Bush Doctor in me and up the Gosforth Valley Road.

ANOTHER CITY FOR ANOTHER LIFE

ANOTHER CITY FOR ANOTHER LIFE

"The increasing dissatisfaction that dominates the whole of humanity will arrive at a point at which we will all be forced to execute projects whose means we possess, and which will contribute to the realization of a richer and more fulfilled life."

Posted by Little Onion at 8:33 am No comments:

"Until the environment is collectively dominated, there will be no individuals — only spectres haunting the objects anarchically presented to them by others. In chance situations we meet separated people moving randomly. Their divergent emotions neutralize each other and maintain their solid environment of boredom. As long as we are unable to make our own history, to freely create situations, striving toward unity will introduce other separations. The quest for a central activity leads to the formation of new specialisations."

At the site of the Califat Mine on the eighth of October 1863 a coming in of water filled the mine workings killing three miners:

Foan Hill to Balm of Rakasiri

Leaving the Robin Hood pub Russ Ralph and I set off not knowing exactly which way to go and choose to go up Foan Hill. I'm not sure of the origin of this word 'foan' it might be an old name for a moor or a bog, well that's what just one reference on the internet told me. I also found a map showing the distribution of the word foan as a surname which seems to be mainly in the south and south west of the UK. Maybe the hill is named after someone. The first thing that crossed my mind was 'fawn' a young deer and the 1911 census tells us that at that time there were in Swannington four houses with a Fone Hill address and one with a Fawn Hill address. The Swannington History Society believes all these houses were on the same road and it is not known when the spelling standardised as Foan Hill. The spellings in the census could just be due to the way the forms were filled in by individual householders.

Walking up the hill we come to the Incline Kennels named after the Swannington Incline, part of Stephenson's Swannington Railway, one of the earliest railways in the Midlands and used to transport coal from the local mines to Leicester.

From behind the fence unseen dogs bark at us.

Russ and I both agree that we are not big fans of dogs but that some are okay and make you think maybe having a dog like that wouldn't be so bad.

Later, still intrigued by the name Foan Hill I search it on Google and it somehow takes me to a page in 'THE DRUGGIST'S RECEIPT BOOK' and to Balm of Rakasiri which was 'Oil of Rosemary dissolved in common gin'. It was made by the Jordan brothers in Canon Street Road, London, who marketed it throughout most of the 1800's as a cure for nervous diseases but actually without saying so openly as a cure for venereal diseases. They were outed as quacks but were still trading through till the 1860s. Oil of Rosemary in gin sounds quite interesting and maybe worth trying not for its 'restorative' properties but for its beverage qualities if it has any.

Any point on a vague walk can lead us to new discoveries, emotions and stories true, half-true and false. Welcome them all.

Paul Conneally
Swannington
Leicestershire
May 2017
Posted by Little Onion at 10:26 pm No comments:

wisteria
the wax and wane
of my heart

Loughbohemia is almost as far from the sea as you can get in Britain but every Thursday and Saturday the sea comes to town with the market and its fresh fish and seafood stalls.

At the start of each day the shop assistant in Loughbohemia's 'Cash Converters' carefully puts out the display of pawned engagement and wedding rings for those considering taking the plunge themselves to peruse, buy and sell back when times get rough.