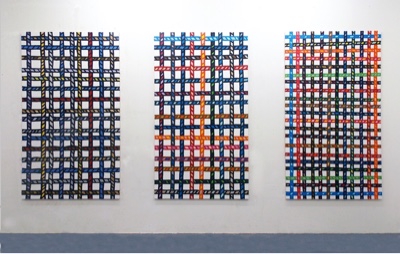 January blues
a small queue forms
at the body shop

Paul Conneally
Loughborough
2016
Posted by Little Onion at 8:41 am No comments: Links to this post

The tiled panel will be installed in New Parks Library along with other works out of the project in early February.

NB The term Involuntary Painting was invented in this context by Millree Hughes and further developed by Hughes with Conneally: If an alien landed on Earth with all the knowledge of painting and paintings but never having seen one what might it mistake for a painting as it moved about the streets, the world?


Posted by Little Onion at 8:30 pm No comments: Links to this post

Artist, Thomas Walker, is caught getting snapped by photographer Kev Ryan on the stairs of Sofa in Loughbohemia (some call it Loughborough) where the artist led exhibition 'Nine Frames', organised by Walker, was taking place.

Photograph: Paul Conneally 2015
Posted by Little Onion at 9:02 am No comments: Links to this post

Paul Conneally
after Issa
Posted by Little Onion at 7:49 pm No comments: Links to this post

'No Person In Dirty Clothes'


After the forced closing of Coalville's Snibston Discovery Museum, Leicestershire County Council now announce that they will not be opening a smaller mining museum in its place onsite.

Snibston was a shining cultural jewel in the heart of the East Midlands, centred around the former Snibston colliery site. Despite huge public and national opposition Leicestershire Couny Council recently closed the museum citing financial reasons but declared that it would be opening a new smaller mining museum, in and around the former colliery buildings and headstock which is a listed national monument.

The council has now gone back on its word announcing on the 11th of January 2016 that it would now not be opening a new museum at Snibston, one that celebrates the proud mining history and heritage of North West Leicestershire, again citing financial concerns.

Plans are currently in progress to disperse the many thousands of artefacts and displays that made up the celebrated Snibston Discovery Museum. These include huge steam trains, beam engines and one of the best fashion collections in the UK. Leicester City Council are looking to take back some of the engines and other artefacts that were passed to Snibston by them for display. Leicester City Mayor, Sir Peter Soulsby, is keen to find ways to upgrade the already excellent Abbey Pumping Station museum and house steam engines and other gems from the industrial revolution and beyond in the heart of Leicester.

Despite similar financial cuts handed down from central government to Leicestershire County Council, Leicester City Council has been and continues to invest in cultural and heritage projects including the acclaimed King Richard III Visitor Centre. This approach is already bringing a payback in terms of increasing visitors to Leicester City and the money that they bring with them and spend in local businesses.

Snibston was beginning to gain a reputation, through its Transform Snibston project, for bringing fine art and heritage together as well as being the destination for many school, college and university trips for educational purposes.

It appears that some elected members of the Tory led Leicestershire County Council do not share the Labour led Leicester City Council vision of preserving and promoting local culture and heritage preferring instead to see a one off financial hit in the selling off of public land and facilities to property developers and building companies.

Posted by Little Onion at 10:47 am No comments: Links to this post